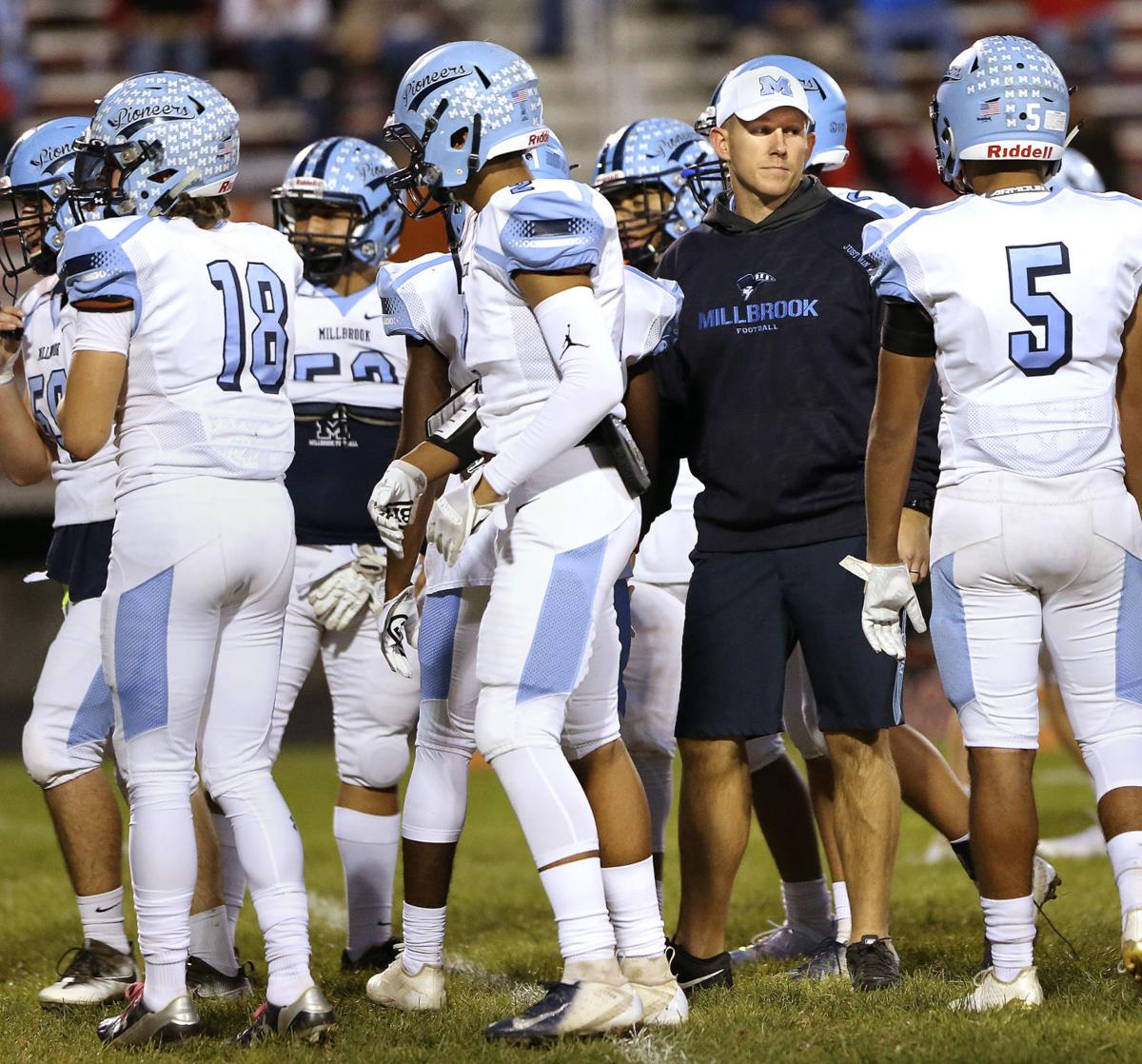 The Commonwealth Football Coaches Association was introduced this week by 15 coaches from around the state. The CFCA was formed in hopes of having input in the decisions made by the state’s governing body for athletics, the Virginia High School League. Millbrook head coach Josh Haymore is not one of the 15 founding members of the organization, but he is one of several area coaches who support the CFCA’s mission. 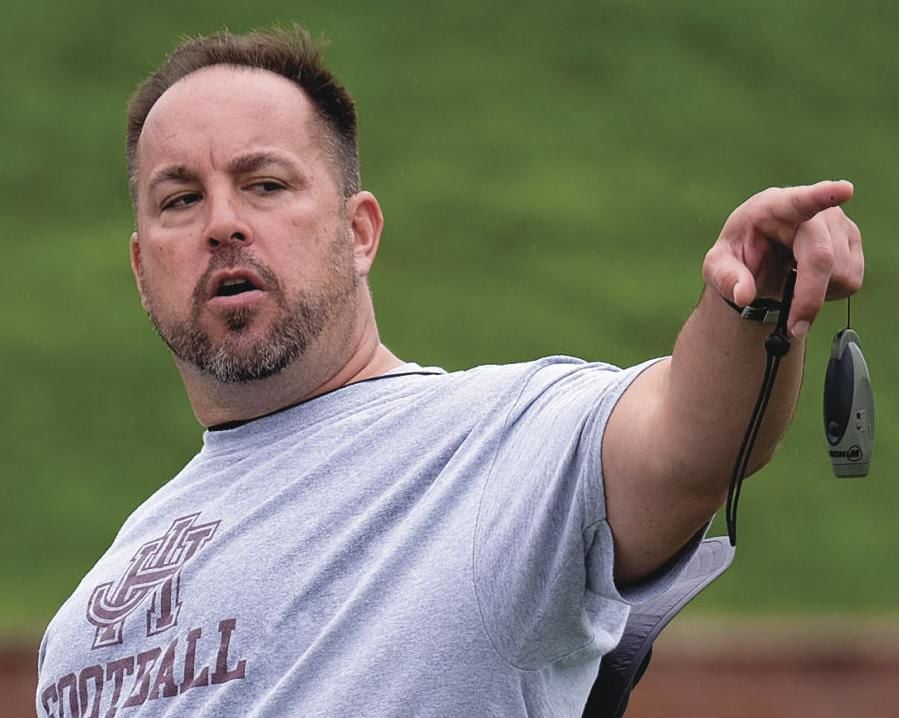 Handley football coach Dan Jones participated in Tuesday's regional Commonwealth Football Coach Association meeting on Zoom. Jones said the CFCA "is a great idea. It's just another way of having somebody speak up for football in Virginia, for the coaches and of course for the kids, the players, and what's in their best interest."

The Commonwealth Football Coaches Association was introduced this week by 15 coaches from around the state. The CFCA was formed in hopes of having input in the decisions made by the state’s governing body for athletics, the Virginia High School League. Millbrook head coach Josh Haymore is not one of the 15 founding members of the organization, but he is one of several area coaches who support the CFCA’s mission.

Handley football coach Dan Jones participated in Tuesday's regional Commonwealth Football Coach Association meeting on Zoom. Jones said the CFCA "is a great idea. It's just another way of having somebody speak up for football in Virginia, for the coaches and of course for the kids, the players, and what's in their best interest."

In forming the Commonwealth Football Coaches Association, high school football coaches hope to have a say in the manner in which the sport is governed in the state.

A group of 15 coaches from five different regions in Virginia went public on Sunday with the organization, which aims to work with the state’s athletic governing body, the Virginia High School League.

A Zoom session with 75 coaches from around the state took place that day, and since then there have been multiple follow-up Zoom sessions to inform coaches of their objectives.

Winchester-area coaches who were interviewed are enthused about the CFCA message, and the VHSL has expressed that it’s open to listening to what the CFCA has to say.

Patrick Kane — who coached Hermitage High School in Richmond from 2001-17 — is one of the 15 CFCA founding coaches. In a phone interview, Kane said interest in the planning for the high school football season given the uncertainty surrounding the COVID-19 pandemic gave the coaches the idea to form CFCA, but their concerns run deeper than that.

“Our voice is not being heard, and hasn’t been in recent history,” Kane said. “COVID-19 has just kind of spurred the impetus for us to actually organize so that we can have a say-so and a word and give our input.”

The VHSL will meet on June 25 to discuss July out-of-season practice and the fall sports season, which begins with the first day of football practice on July 30. The VHSL is currently not allowing any teams to practice in accordance with Gov. Ralph Northam’s restrictions. Currently, gatherings of more than 10 people are currently banned and schools are closed.

Kane said coaches are going to be the ones that have to implement whatever decisions the VHSL sets forth in any situation, so they should have a chance to provide their insight into the best way to go about it.

“If you aren’t in the arena [with the football coaches] you don’t know all the dynamics of it,” Kane said. “It’s very difficult to understand the differences. For example, the southwest region might need something different than the city of Richmond might need in terms of doing what you need to do [to start holding football practices again].

“If you don’t have at least a word in [from coaches], then basically the people making decisions are making decisions based on ignorance. In order for a sport to be safe you need to know all the dynamics, and thinking you know and knowing are two different animals. Having the input of people who are imposing [a potential] plan should be thought of as beneficial.”

“We have been made aware that a group of coaches are forming an association,” Dolan said. “We welcome input from our football coaches, and all coaches, since they are on the front lines working with students.

“We have been working hard to involve coaches more in the VHSL and to seek their advice. We see this new association as coaches who love the game and have a deep interest in what’s best for the students they coach. We look forward to working with them.”

Kane said the CFCA is open to getting coaches from other sports involved, but given that the CFCA is in its infancy it’s focus is on organizing football coaches right now.

“We feel very fortunate [the CFCA has] been meet with open arms,” Kane said. “We’ve been getting a lot of good comments about it. We want to do things for the game we love and protect our student-athletes and promote our student-athletes so they can have the best opportunity to have a great experience.”

Clarke County football coach and director of athletics Casey Childs said when he first got into coaching in the late 1990s, the Virginia High School Coaches Association had a significant presence in the state, with hundreds of coaches attending conferences, but there aren’t nearly as many people involved now. So he likes that the CFCA is trying to have some input in state athletics.

“A lot of times the VHSL does put committees in charge of anything they’re looking to change,” Childs said. “Occasionally there will be a coach on it, but most of the time it’s [athletic directors]. I think this might be a really positive step in the right direction for the football coaches association and the Virginia High School League.”

In a text message, Sherando coach Bill Hall said, “I believe it’s good for every party to have a voice when making decisions that affect many people.”

Millbrook coach Josh Haymore said it’s great to see so many football coaches around the state coming together, and that the CFCA wants to help in the process of getting football teams back on the field.

“It’s not just hoping we get 10 games and playoffs. It’s just we haven’t seen them [for two and a half months] and we want to get back. And hopefully we’ll have more of a say with this coaches association and what goes on.”

Handley football coach Dan Jones participated in a Zoom session that featured numerous northern Virginia coaches on Tuesday, and he liked what he heard about unifying as a group to support high school football players and trying to return to organized team activities.

“They’re still coming up with ideas for how they want to approach [the VHSL],” Jones said. “They want to make sure the coaches are happy with [their ideas]. They don’t want to just throw a product out there that we’re not all in agreeance with, because they want as many coaches on board. It was a good meeting. Everybody was throwing out ideas and their concerns with things.

“I think this is a great idea. It’s just another way of having somebody speak up for football in Virginia, for the coaches and of course for the kids, the players, and what’s in their best interest.”