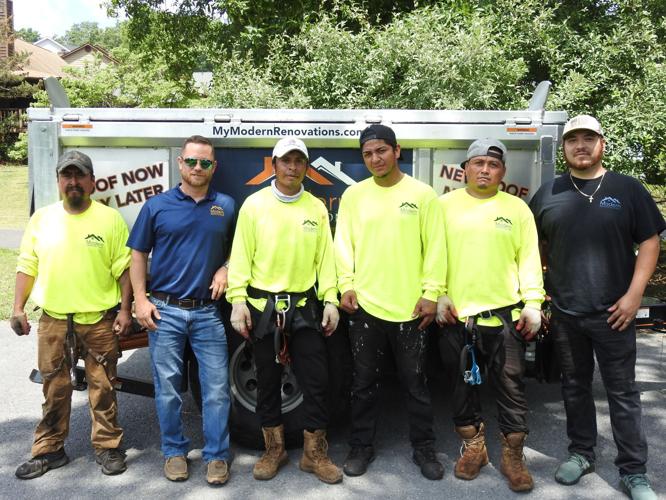 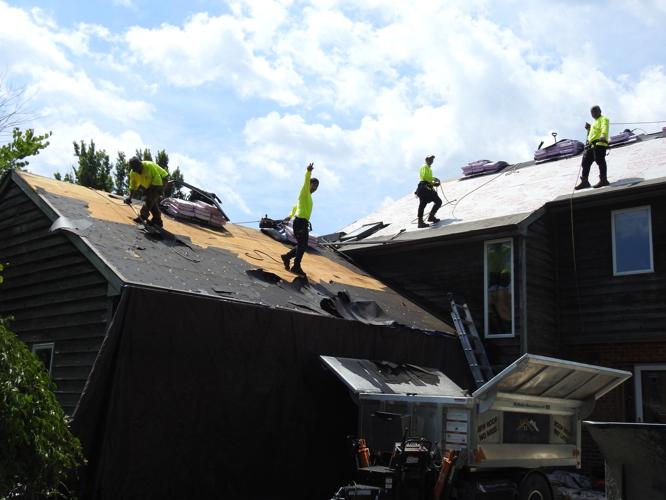 Through a partnership with Blue Ridge Habitat for Humanity Inc., Sheridan, 35, was selected to receive the roof replacement at no cost.

Sheridan, who served in the Marines and is a 100% disabled veteran, said it felt “amazing” to have a new roof on his house.

“I was super surprised and incredibly thrilled to be selected and be eligible for this,” he said. “It was a massive, massive help.”

Modern Renovations owner Larry Demarco said his Martinsburg, W.a.-based company was contacted by Habitat officials about helping with the project.

“It was leaking. It was failing,” he said. “It was just compromised and it wasn’t holding up.”

Demarco sees the project as paying back Sheridan for his service to the country.

“It’s kind of a small gesture in the grand scheme of things,” Demarco said. “It’s one roof … but to him, it’s a lifetime of peace of mind.”

Demarco estimates about $10,000 in labor and materials were donated for the project. He called Owens Corning “the cream of the crop when it comes to roofing materials” and said the roof should last for 50 years.

“So it’s not like he’s getting subpar material because we’re doing him a favor,” Demarco said. “He’s quite literally getting the best material on the market with the strongest warranty on the market.”

The Owens Corning Roof Deployment Project is a nationwide effort to show gratitude to veterans and the families who support them. Since the program’s inception in 2016, more than 325 military members have received new roofs.

“What they’re doing is quite awesome,” Sheridan said.

BERRYVILLE — Clarke County Public Schools officials say they're not trying to hide anything from the public about two recent matters that generated controversy.

WINCHESTER — City Council is considering some major updates to its ban on firearms in local government buildings, public parks and at designated events.

WINCHESTER — City Council and the Winchester School Board have pledged to work more closely together when developing annual operating budgets for Winchester Public Schools.

WINCHESTER — Blue Ridge Hospice has launched a 24/7 telephone support service to make it easier for the community to access the nonprofit's end-of-life services as soon as the need arises.

Winchester School Board amends budget; staff to get 5% pay raise plus $1K bonus

WINCHESTER — A 33-year-old Winchester man will serve three years in prison for robbing a North Loudoun Street 7-Eleven with a BB gun on Christmas Eve 2020.

WINCHESTER — Residents of the Raven Pointe subdivision want the Frederick County government to restrict through truck traffic on several streets in their neighborhood, but the county’s transportation committee on Monday decided not to move forward with the request.

Clarke DSS seeking input on how to better provide services

BERRYVILLE — The Clarke County Department of Social Services (DSS) wants to find out from the public how it can better serve them.

WINCHESTER — With hundreds of thousands of dollars changing hands and dozens of documents to sign, buying a house can be an overwhelming task.

HARRISONBURG — A Winchester man has been sentenced to six years in federal prison for distributing eutylone, a synthetic substance similar to amphetamine that many dealers falsely sell as the psychoactive drug MDMA.

WINCHESTER — A Maryland man has been indicted for attempted second-degree murder after allegedly firing a shot at a man in Frederick County that missed its target and instead hit a nearby townhouse.

WINCHESTER — The skies above Jim Barnett Park will light up on July 3 to cap off Winchester's daylong Rockin' Independence Eve celebration.

Watson finally makes it to the 4th round at Wimbledon

Italy's Serie A to have 1st female referee next season