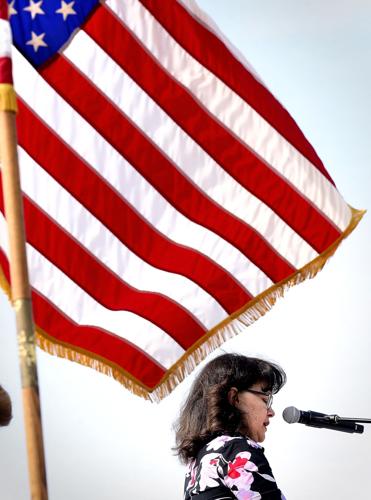 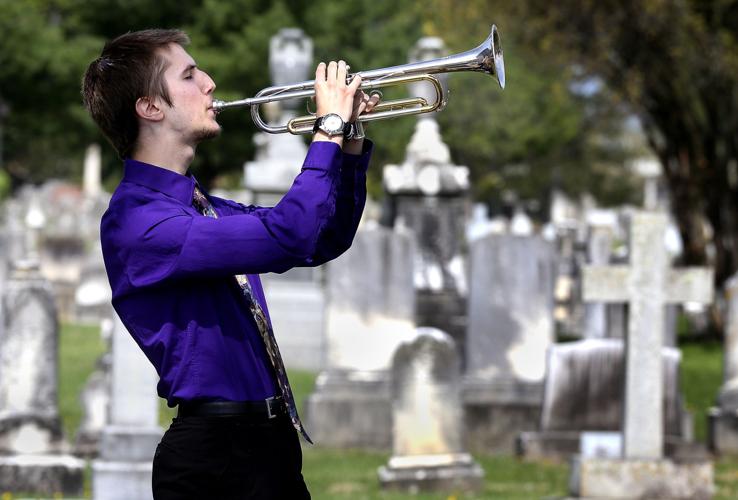 John Handley High School senior Ethan Grosholz plays “Taps” at the conclusion of the annual spring pilgrimage of students and staff from Winchester Public Schools to the tomb of Judge John Handley in Winchester’s Mount Hebron Cemetery on Monday. 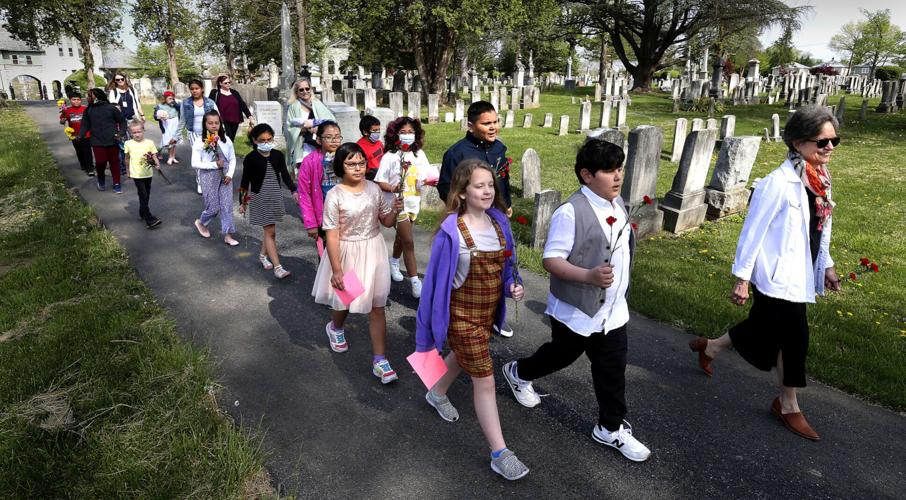 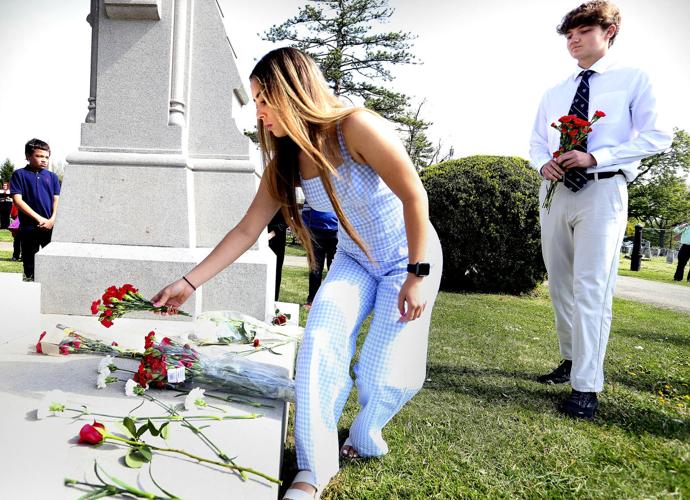 Handley High School junior Jailynn Rivera lays flowers at the tomb of Judge John Handley in Winchester’s Mount Hebron Cemetery Monday during the annual spring pilgrimage by students to the grave of the Winchester benefactor. At right is Class of 2022 President Gordon Burton.

John Handley High School senior Ethan Grosholz plays “Taps” at the conclusion of the annual spring pilgrimage of students and staff from Winchester Public Schools to the tomb of Judge John Handley in Winchester’s Mount Hebron Cemetery on Monday.

Handley High School junior Jailynn Rivera lays flowers at the tomb of Judge John Handley in Winchester’s Mount Hebron Cemetery Monday during the annual spring pilgrimage by students to the grave of the Winchester benefactor. At right is Class of 2022 President Gordon Burton.

WINCHESTER — Decades ago, on the last day of school, every Winchester Public Schools student walked from their school to the tomb of Judge John Handley in Mount Hebron Cemetery where they received their final report cards.

The tradition has changed since then, but the annual pilgrimage to the Winchester benefactor’s grave continues.

On Monday, about 60 WPS students and staff, several city officials, and a school drummer, marched from Cameron Street up East Boscawen Street to the cemetery bearing flags and flowers. The number of students participating was reduced due to the coronavirus pandemic, but the spirit of gratitude for Handley’s bequest to the city remains.

Handley, who died in 1895, left Winchester a large sum of money. About $250,000 was earmarked to build Handley Library in 1913, while approximately $1.6 million from his estate was transferred to the Handley Trust Board of Trustees in 1917 to build schools to educate the community’s children, according to Karen Tlumach, board of trustees treasurer.

At Monday’s pilgrimage, students placed flowers on Handley’s tomb as the Handley High School Hilltop Singers sang “The Last Rose of Summer.” The flower laying was preceded by speeches from school division leaders and students.

“Because of John Handley’s benefaction, we continue to provide excellent education to all of our students in Winchester Public Schools,” Handley Principal Sharazad Kablan told students. “We offer our highest gratitude and recognition to John Handley and remind our graduating class and future classes that the future belongs to them. And that they have a responsibility to continue this rich history and build upon this beautiful legacy.”

Kablan briefly touched on Handley’s rags-to-riches life. Born in Ireland in 1835, his father and younger sister died in the Irish Potato Famine of 1847, according to a summary of John Handley and the Handley bequests by author and former Handley High School principal and WPS superintendent Garland R. Quarles. The famine killed some 750,000 over a decade and caused the migration of 2 million people to North America.

Handley emigrated to Canada and then worked as a carpenter in Rochester, New York, and became a U.S. citizen in 1856. While working for the administration of President James Buchanan, he earned a law degree in 1860 and married Catherine Thayer, a rich widow from Charleston, South Carolina. The two later separated, and Handley had no children.

He moved to Scranton, Pennsylvania, in 1860 and became wealthy by investing in coal-rich land and later opened a bank and the Wyoming Hotel in Scranton. Handley served three months in the Pennsylvania militia for the Union, but he was a Confederate sympathizer. He kept portraits of Confederate Gen. Robert E. Lee and Gen. Stonewall Jackson in his home, according to Quarles.

Handley left most of his fortune for Winchester rather than Scranton for several reasons, according to The Lackawanna (Pennsylvania) Historical Society Bulletin.

“It was probably the result of a disagreement he had with city officials over the paving of Lackawanna Avenue in front of his hotel and bank; his disappointment at his not being re-elected to serve another term as judge, and his well known Southern sympathies,” said a 1978 Bulletin edition. “Handley was a Democrat, a tall man with a dignified bearing and served our county with distinction and honor as a wise judge. Behind an austere and reserved appearance, he had a very generous heart which Winchester, Virginia has ever since come to appreciate.”

While Handley never lived in Winchester, Quarles wrote that he began investing in the city and in Frederick County in the 1870s. In 1889, he planned a massive development for Winchester as president of the Equity Improvement Co., which was incorporated by the Virginia legislature in 1890.

The development included the Hotel Winchester, a canning company, cotton mills, a factory and an opera house. But in the boom-and-bust era of the 1890s, most of the deal fell through and the hotel closed shortly after opening. Quarles wrote that Handley’s guilt over investors who lost money in the deal, combined with his Confederate sympathies, may have led to the bequest.

Handley died in 1895. Today, the trust is worth roughly $10 million, including $4.7 million for WPS, Tlumach said.

Winchester School Board President Marie Imoh noted Handley never got to see what his money built, but he understood how public education can uplift people. She compared the long battle over how the endowment would be spent to a track team working toward collective victory, and she challenged students to dream big and focus on public good.

“Maybe like Judge John Handley, you won’t be able to do it all alone and perhaps you may not see it fully come to manifestation, but don’t be afraid,” she said. “Tell someone about it and don’t let your dream die with you.”

So John Handley was an immigrant ...interesting.