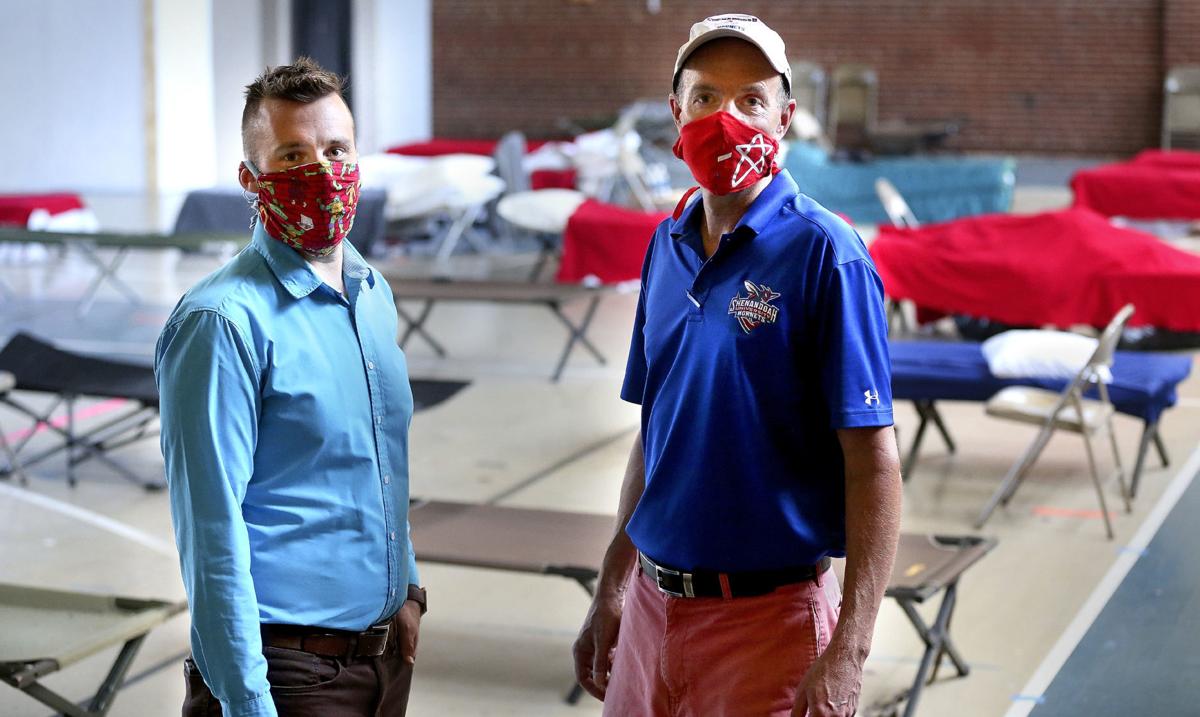 Keith Jones Pomeroy (left), director of civic engagement at Shenandoah University, and Barry G. Schnoor, director of the physical plant at the school, stand inside the armory building on campus Monday that has been used as a temporary shelter since April 16. The shelter is closing Wednesday morning. 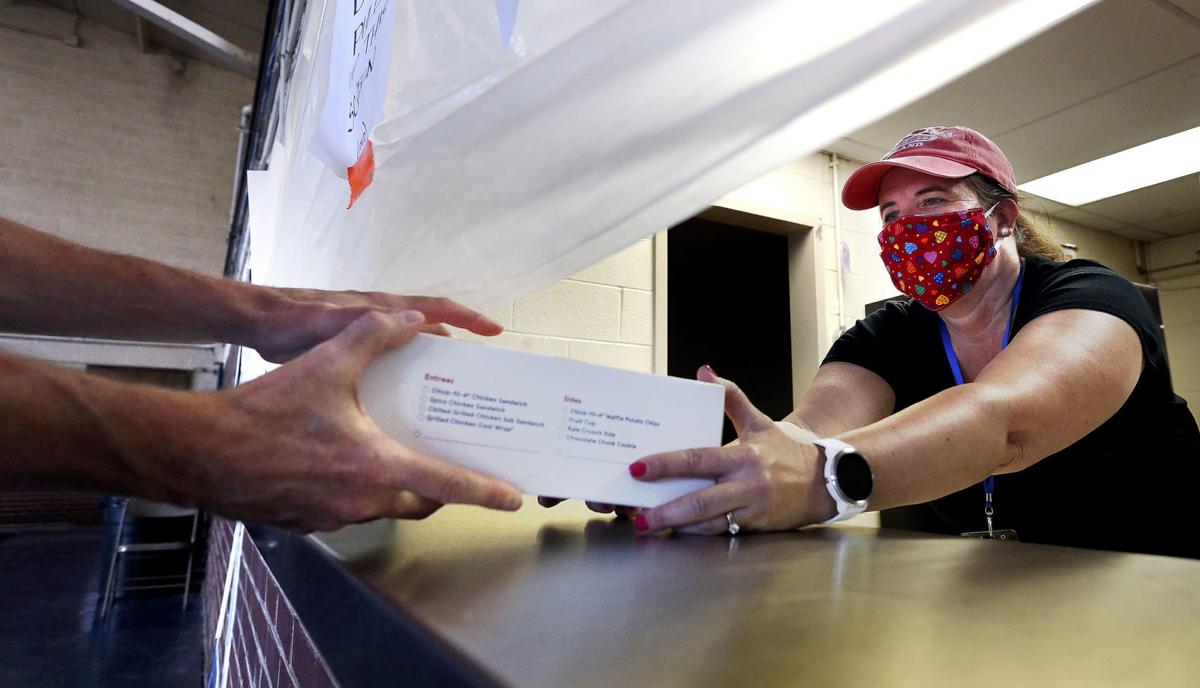 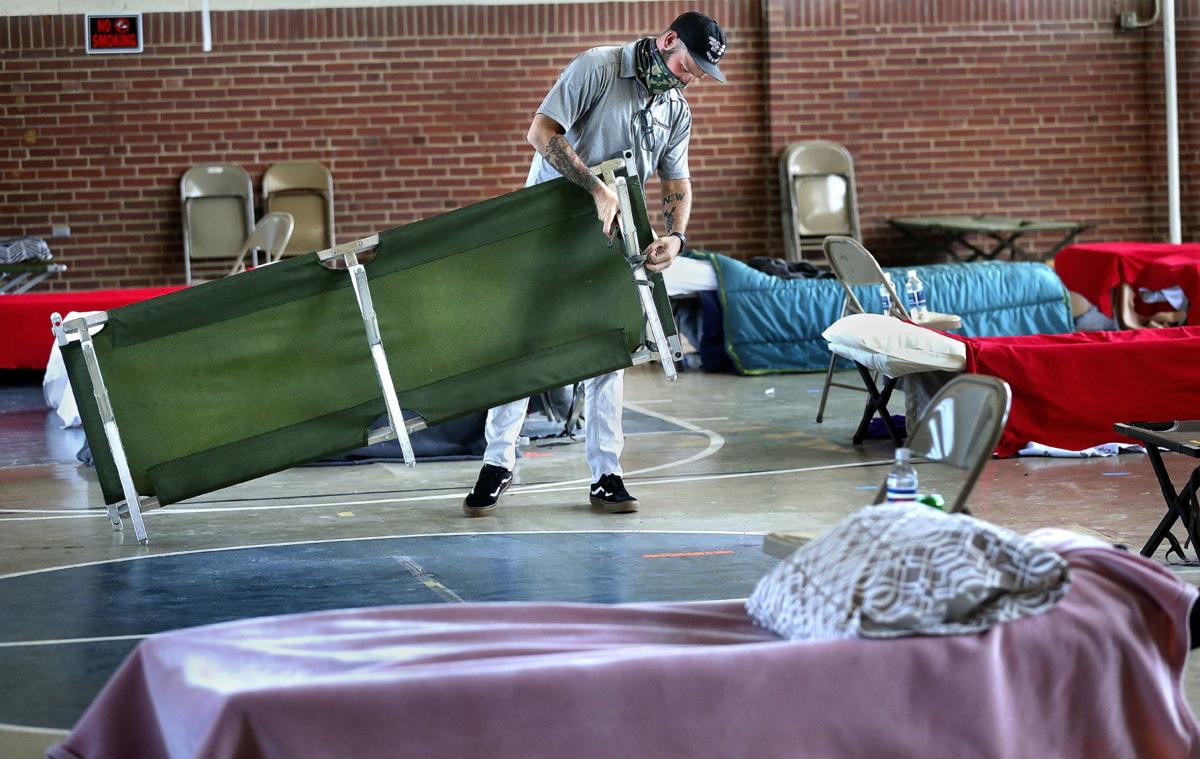 Keith Jones Pomeroy (left), director of civic engagement at Shenandoah University, and Barry G. Schnoor, director of the physical plant at the school, stand inside the armory building on campus Monday that has been used as a temporary shelter since April 16. The shelter is closing Wednesday morning.

WINCHESTER — Tonight will be the final night of operations for an emergency shelter established to accommodate homeless people during the COVID-19 pandemic.

“This has been quite a journey, man. Quite a journey,” said Winchester Rescue Mission Executive Director Brandan Thomas, who worked with Shenandoah University and numerous community and government agencies to open the shelter on April 16 in the former National Guard Armory at 608 Millwood Ave.

Thomas said a total of 84 people utilized the shelter over the past two months. They were assisted by eight paid staff members and up to 30 volunteers per week.

“The staff and the volunteers who worked here made this thing run so smoothly,” he said.

The need for the emergency shelter arose when measures to limit the spread of COVID-19 led to numerous area businesses temporarily closing or adjusting operations. Hundreds of area residents found themselves furloughed and without a steady paycheck to cover living expenses.

“We had a resource we could utilize,” said Keith Jones Pomeroy, director of civic engagement at Shenandoah University. “It was an easy win-win.”

In less than a week, Fellowship Bible and Canvas churches of Winchester helped to clean the building and set up cots that were provided by the nonprofit Winchester Area Temporary Thermal Shelter (WATTS) organization. Shenandoah University officials installed Wi-Fi, and members of the school’s theatrical department set up partitions between the sleeping sections for men and women.

“We were able to resurrect the water heater and get the showers running,” said Barry Schnoor, director of Shenandoah’s physical plant. “The showers hadn’t worked in 10 years.”

Other groups that offered assistance, supplies and funding for shelter residents included the Winchester and Frederick County sheriff’s offices, the Winchester Police Department, the city fire marshal’s office, the Western Virginia Continuum of Care, AIDS Response Effort and the Funkhouser family of Winchester.

In addition to getting a free meal every night, shelter residents also had restroom and shower access, and were given personal hygiene items and personal protective equipment such as face masks.

“This has been beautiful,” said Vicki Culbreth, a Winchester Rescue Mission volunteer who serves as the nonprofit’s development coordinator. “We were able to reach people and transform lives.”

Shelter clients also received information and assistance to help them get back on their feet.

“We’ve had people who lost their jobs. They come in and we connect them with employers,” Culbreth said. “We had one gentleman who stayed two nights. Within five days, he had a full-time job.”

Shelter residents were screened every day for symptoms of COVID-19 and were tested for the virus as necessary.

“We had four people that were tested, and they all came back negative,” Thomas said.

The shelter was never intended to be permanent. Shenandoah University agreed to host it until June 10, coinciding with the expiration of Virginia Gov. Ralph Northam’s initial stay-at-home mandate. Also, Thomas said all the funding for the shelter and its services has been spent.

When clients leave the shelter for the final time Wednesday morning, they’ll see a sign by the door reminding them to stay strong and persevere.

The big question now is, where will the people go? WATTS only operates during cold weather, and the Winchester Rescue Mission and Salvation Army homeless shelters are at or near capacity.

“We’ve been coordinating with CCAP [Congregational Community Action Project of Winchester] and WATTS, talking with those folks to see how we can best help these guys once we close down Wednesday,” Thomas said. “I’m excited to see that collaboration because the only way we’re going to solve this is by working together.”

So my question is wheres all that money Brandan was begging for during his "missionary ride" to LA??

Shame that people who normally turn their nose up at the homeless just to get their name in the news to make themselves look good for the registered voters such as the police and govt folks.shame how Winchester has plenty of money to hike taxes build parking garages but conveniently has no money to fund projects for the homeless.just another sad pathetic way to make everyone look good..smh

Most of the homeless around here are alcoholics.

We know which finger you'll lift to help...