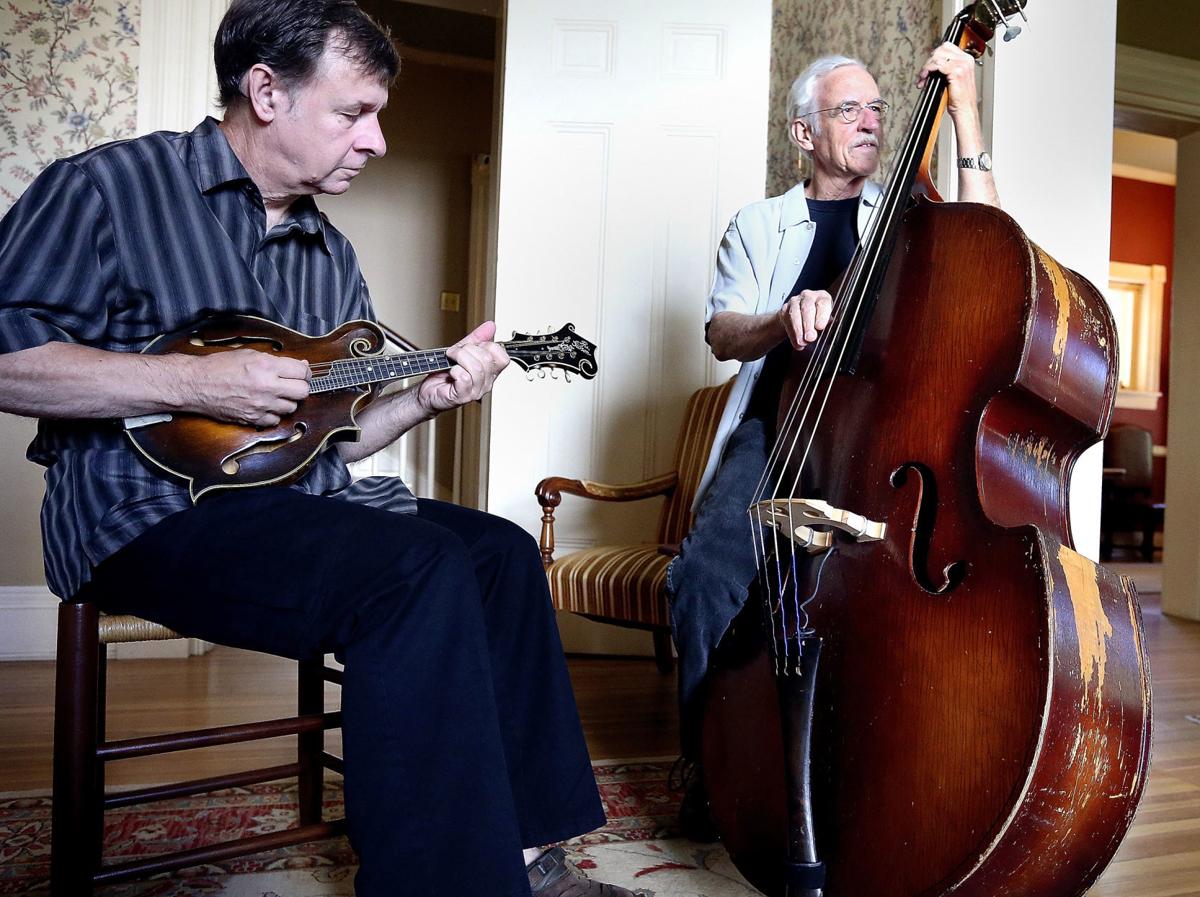 Winchester residents David McLaughlin (left) and Marshall Wilborn are members of the Johnson Mountain Boys band which is being inducted into the Bluegrass Hall of Fame. 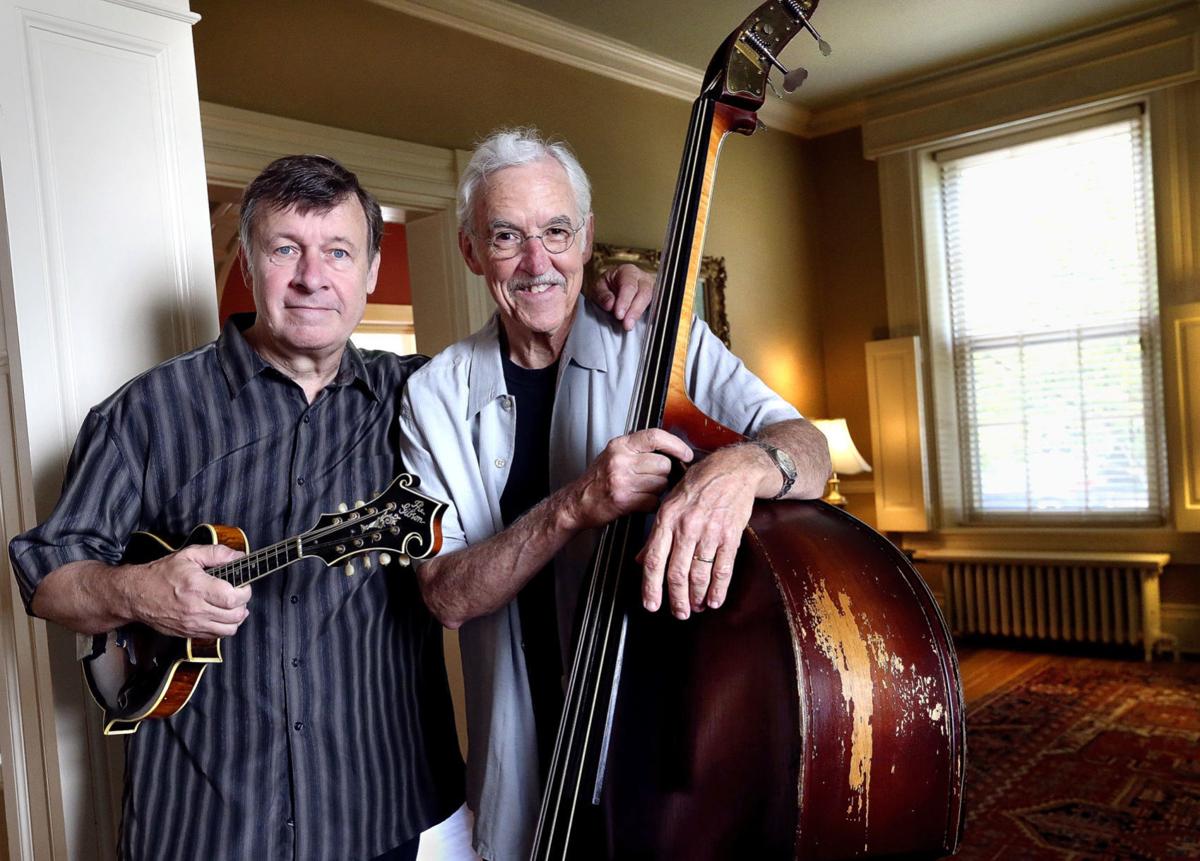 Winchester residents David McLaughlin (left) and Marshall Wilborn, are members of the Johnson Mountain Boys band which is being inducted into the Bluegrass Hall of Fame.

Winchester residents David McLaughlin (left) and Marshall Wilborn are members of the Johnson Mountain Boys band which is being inducted into the Bluegrass Hall of Fame.

Winchester residents David McLaughlin (left) and Marshall Wilborn, are members of the Johnson Mountain Boys band which is being inducted into the Bluegrass Hall of Fame.

WINCHESTER — City residents can now boast that they live alongside two Hall of Fame musicians.

David McLaughlin and Marshall Wilborn, both of whom live in Winchester, became famous as members of the Johnson Mountain Boys, a quintet being inducted this fall into the International Bluegrass Music Association’s Bluegrass Hall of Fame and Museum in Owensboro, Kentucky.

“It’s a really cool thing,” said McLaughlin, a fiddle and mandolin player who was still in high school when the Johnson Mountain Boys formed in January 1978 in the Washington, D.C., area.

When McLaughlin took time off to attend college, he was replaced by Eddie Stubbs, who now serves as the primary announcer for WSM Radio‘s live broadcasts from the Grand Ole Opry in Nashville. McLaughlin rejoined the group in 1981, but switched to mandolin so Stubbs could continue as the band’s fiddler.

By the mid-1980s, the Johnson Mountain Boys had recorded six successful albums and become a top concert draw, but McLaughlin said something was missing. They found that something when they heard Wilborn, a native of Texas, playing bass for the Pennsylvania bluegrass band Whetstone Run.

“We whispered as we sat there at a table listening to the band, ‘This guy is our missing ingredient,’” McLaughlin said. “We all knew if we could get Marshall or someone of that caliber, it would send us to new heights.”

“Initially, I told Dudley I could fill in,” Wilborn said. “It was an exciting and fun time.”

By the time Wilborn became a full-fledged Johnson Mountain Boy in 1986, his new bandmates had already played thousands of gigs around the world. The exhausted group decided to call it quits with a farewell concert on Feb. 20, 1988, in Loudoun County that was recorded for later release as an album.

That album, “At the Old Schoolhouse,” became a critical and commercial success, earned the Johnson Mountain Boys a 1989 Grammy nomination and convinced the band members to keep playing together. Wilborn couldn’t return on a permanent basis, though, because he and his wife, banjo player and singer Lynn Morris, had already launched The Lynn Morris Band.

The Johnson Mountain Boys released the last of their 10 albums, “Blue Diamond,” in 1993, and played their final concert in November 1996 in Myrtle Beach, S.C. Band members have worked together several times since then — for example, the group Seneca Rocks is comprised of four of the five Johnson Mountain Boys — but have never reunited as an ensemble.

Unfortunately for fans, it doesn’t look like a full reunion will ever happen. Stubbs has retired from performing, McLaughlin said, and cannot leave his job at WSM long enough to regain his ability to play in the fast, clean style that made the Johnson Mountain Boys famous.

“He said he would embarrass himself and embarrass the group,” McLaughlin said. “Without Eddie, it just isn’t the Johnson Mountain Boys.”

Unlike the Rock and Roll Hall of Fame in Cleveland, which rarely inducts band members that were not part of a group’s original lineup, the Bluegrass Hall of Fame inducts a band as a whole. That means Wilborn will be honored along with everyone else who was part of the group from 1978 until 1996.

“No names will be mentioned,” Wilborn said. “It’s just the Johnson Mountain Boys.”

Today, McLaughlin and Wilborn continue to perform in various musical lineups while also offering private music lessons. Additionally, McLaughlin is a wedding officiant who, with partner Susan Winkeler, operates the Nancy Shepherd House bed and breakfast and the Fuller House Inn, both in Old Town Winchester.

“I love it here,” said McLaughlin, who moved to Winchester in 1985. Wilborn and Morris followed suit in 1986.

Local concerts are currently on hold because of the coronavirus, but as soon as venues are available, it’s a safe bet that McLaughlin and Wilborn will be performing on a stage somewhere in or around their adopted hometown.

“The appreciation of all of the fans out there feeds us super vitamins,” McLaughlin said.

The 2020 inductees into the Bluegrass Hall of Fame are the Johnson Mountain Boys and New Grass Revival. This year’s public induction ceremony in Raleigh, N.C., has been canceled due to the COVID-19 pandemic, but a virtual ceremony is planned during the International Bluegrass Music Association’s annual meeting Sept. 28-Oct. 3. For more information, visit ibma.org.

Very cool! Kind of surprised the "cancel culture" hasn't started crying for heads to roll due to the "lack of diversity" within bluegrass or some such nonsense...

Heh. Throwing a wet blanket on a good story is an artform ...

Am I wrong, Don? I mean, count the # of ways bluegrass goes against the Leftist ideology and then let come on back and we'll chat...