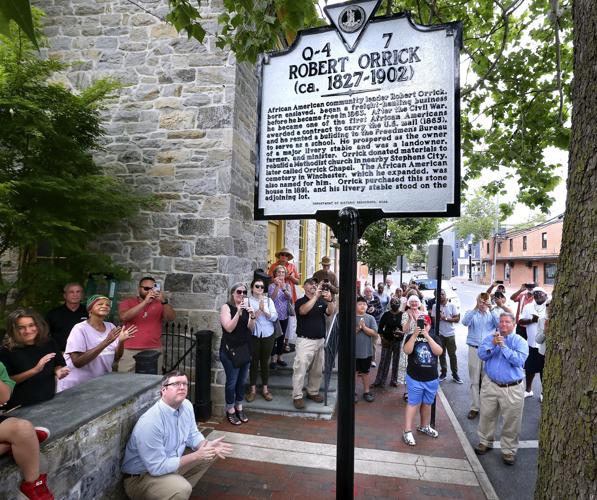 The crowd applauds as a historical marker to honor African American community leader Robert Orrick is unveiled in front of his former home at 15 S. Braddock Street in Winchester on Monday. 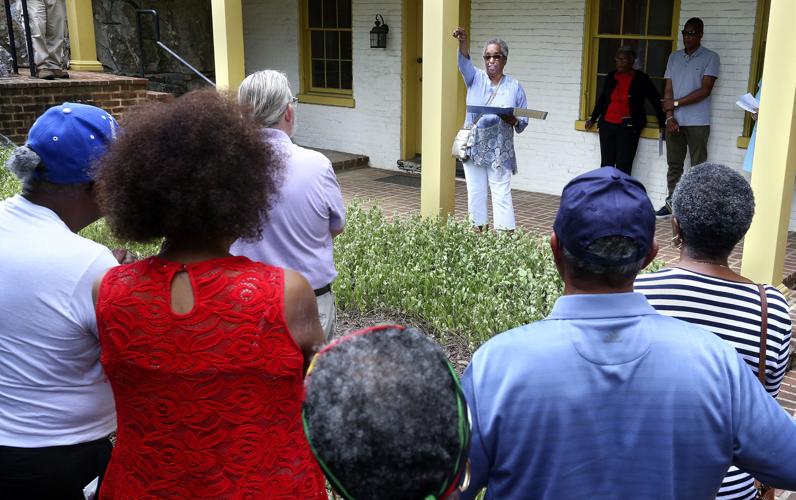 Brenda Nelson talks about Robert Orrick’s life during a ceremony to unveil an historical marker in front of his former Braddock Street home. 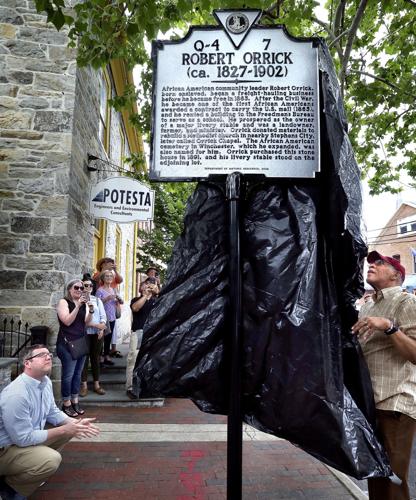 Winchester resident and former Handley High School teacher and coach Tommy Dixon (right) unveils a historical marker honoring African American community leader Robert Orrick in front of his former home. Kneeling and applauding at left is Nick Powers of Winchester, curator of collections at the Museum of the Shenandoah Valley.

The crowd applauds as a historical marker to honor African American community leader Robert Orrick is unveiled in front of his former home at 15 S. Braddock Street in Winchester on Monday.

Brenda Nelson talks about Robert Orrick’s life during a ceremony to unveil an historical marker in front of his former Braddock Street home.

Winchester resident and former Handley High School teacher and coach Tommy Dixon (right) unveils a historical marker honoring African American community leader Robert Orrick in front of his former home. Kneeling and applauding at left is Nick Powers of Winchester, curator of collections at the Museum of the Shenandoah Valley.

WINCHESTER — A former slave who became a successful entrepreneur and community benefactor had his place in local history cemented Monday with the dedication of a historical marker in front of his former home in Winchester.

The marker from the Virginia Department of Historic Resources was the culmination of months’ worth of research and advocacy by Winchester’s Black History Task Force, which also organized the unveiling of the silver roadside sign on Monday afternoon in front of The Orrick House at 15 S. Braddock St.

“All the attention for all the work goes to the Black History Task Force for bringing all the achievements of Black Americans forward,” Winchester Mayor David Smith said during Monday’s ceremony, one day after Juneteenth which celebrates the emancipation of slaves in America. The holiday was observed by the federal government and some state and local governments on Monday.

“This is the town where Robert Orrick was born, raised, lived and died,” Task Force member and researcher Brenda Nelson said to the approximately 30 people who gathered for the dedication. “Although born a slave [in 1841], he became a free man, a minister, a property owner, a community leader. At the time of his death, he was the town’s most prominent African American citizen and known throughout the surrounding area.”

In 1861 and ‘62, when Confederate forces controlled Winchester, Orrick was allowed by his owner, Joseph Cain, to start a livery business, renting horses and wagons to the Confederate Army and boarding horses for a fee. By the time Orrick was freed from slavery in 1863, his business was thriving.

Sometime around the end of the Civil War in 1865, Nelson said Orrick also became a mail carrier, “most likely one of the first African Americans to do so.”

Orrick went on to become an ordained minister and the owner of a second livery stable, two farms in Frederick County and several pieces of property in Winchester. Nelson said he used the money he earned to help the local Black community, providing space for a school in Winchester that was operated by the Freedman’s Bureau and providing materials to rebuild an African American Methodist Church in Stephens City that was dismantled by Union troops during the final months of the Civil War so the lumber could be used to build winter quarters.

“The church was named Orrick Chapel in his honor,” Nelson said of the sanctuary at 5310 Mulberry St. in Stephens City that, in 1991, merged with Stephens City United Methodist Church.

In 1883, Orrick bought a parcel of land adjacent to Winchester’s existing Black cemetery so the small burial ground that had existed for about a century could be enlarged. Orrick Cemetery at 501 S. Braddock St. is still in use today.

In March 1891, William M. Atkinson conveyed to Orrick a stone house at 15 S. Braddock St. In addition to being Orrick’s home for the rest of his life, Nelson said, “He established a livery business at this address.” That business, located on the south side of the property, no longer exists and has been replaced by a parking lot.

Orrick died on July 8, 1902. The stone house on South Braddock Street remained in his family until 1966 and is now home to the Winchester branch of the environmental consulting firm Potesta and Associates Inc.

“We’re really lucky to be housed in this office. It’s a great building,” Joe Knechtal, manager of Potesta’s Winchester branch, said on Monday.

“Robert Orrick left a legacy of service to his community, and it’s befitting we place a Virginia highway marker to honor that service,” Nelson said.

It won’t be the final marker for Black people who helped Winchester become the community it is today. The Black History Task Force announced on Monday the Virginia Department of Historic Resources has approved a marker for the Brown family’s former home at the corner of North Loudoun Street and East Fairfax Lane.

Charles and Maria Brown were married in 1865 and raised seven children, several of whom became doctors or pharmacists and all of whom earned doctorates. A date for the dedication of the Brown family marker has not yet been announced.

It would be a blessing if this article could encourage more scholarship regarding Rev. Robert Orrick’s life so we might better understand how he stepped out in his Christian faith to embrace a future that was neither guaranteed nor of his own choosing. He sacrificed his time, talents and treasure to assist those less fortunate than himself. Orrick kept a relentless eye on his goals. He was a man who thrived in life with perseverance, joyful dedication and unwavering focus.

As successful as Mr. Orrick and the Browns were, they still could not go in the front entrance of many buildings, could not eat at restaurants with whites, could not sit with white people at the theater, etc.

WINCHESTER — The Frederick County School Board plans to name an interim superintendent by July 1, according to School Board Chairman Brandon Monk.

Here is the latest SEC sports news from The Associated Press