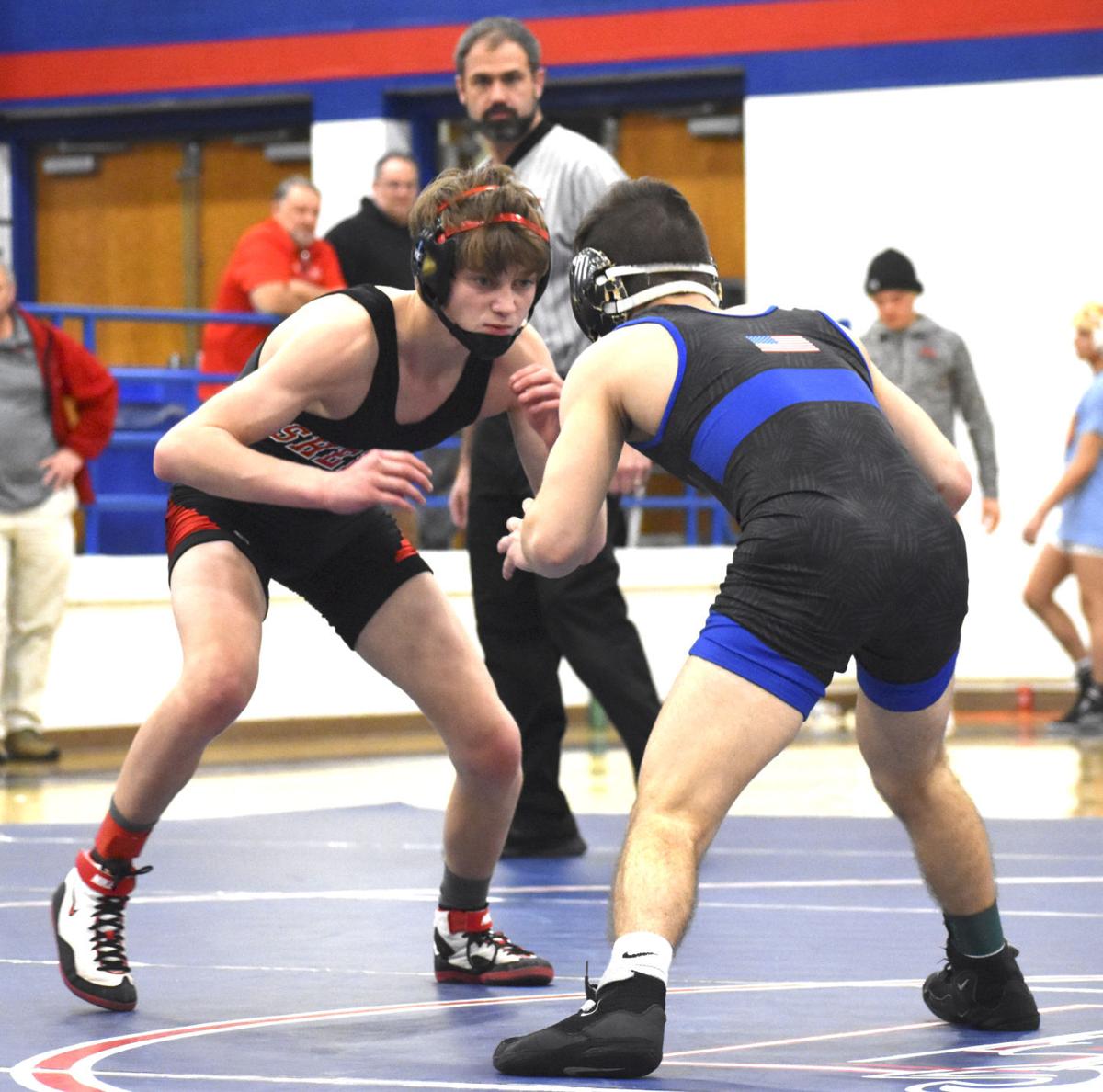 Sherando sophomore Keagan Judd (left) is looking to add a second state title to his name after winning at 113 pounds last year. He will wrestle at 132 or 138 this year. 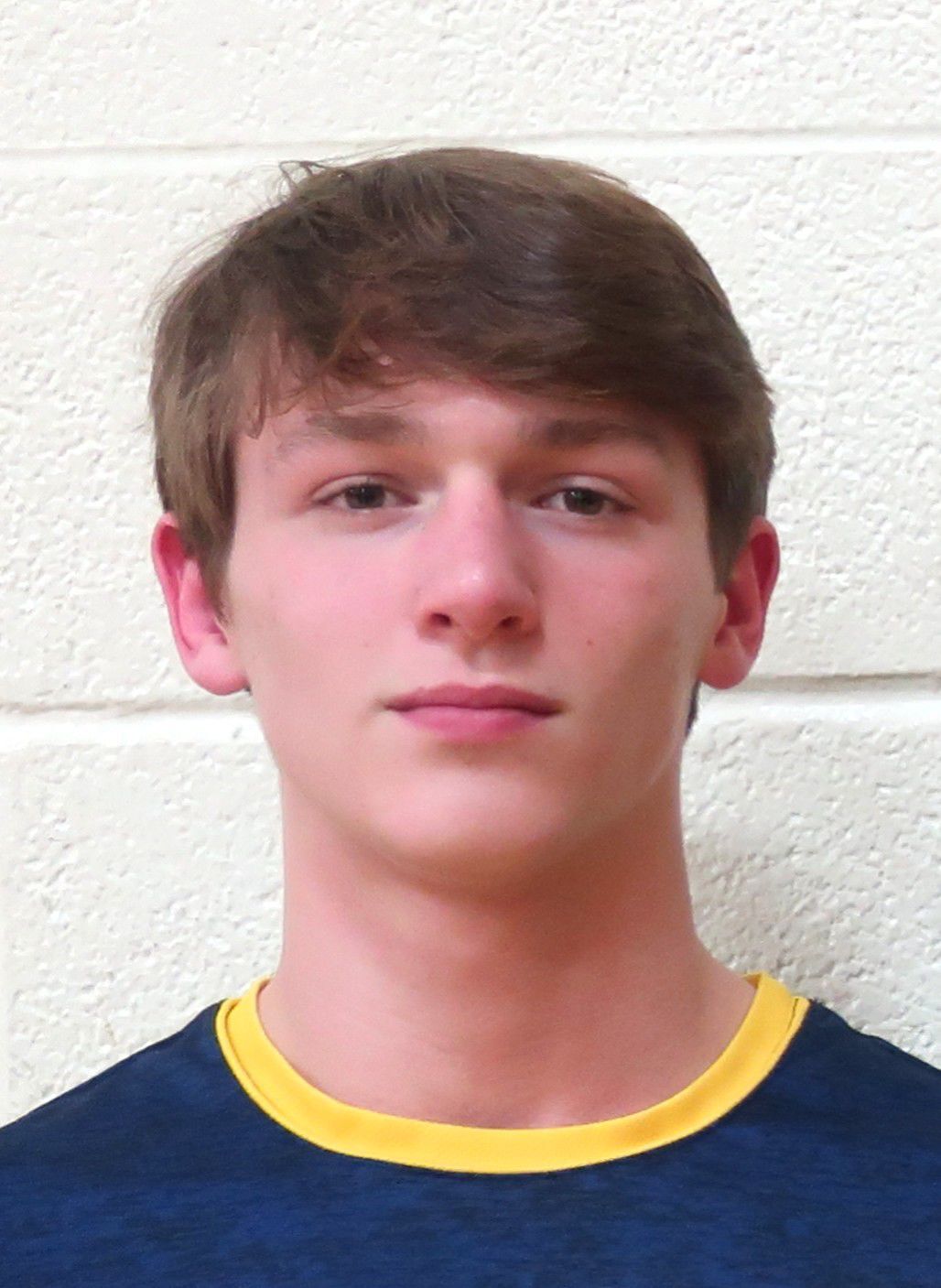 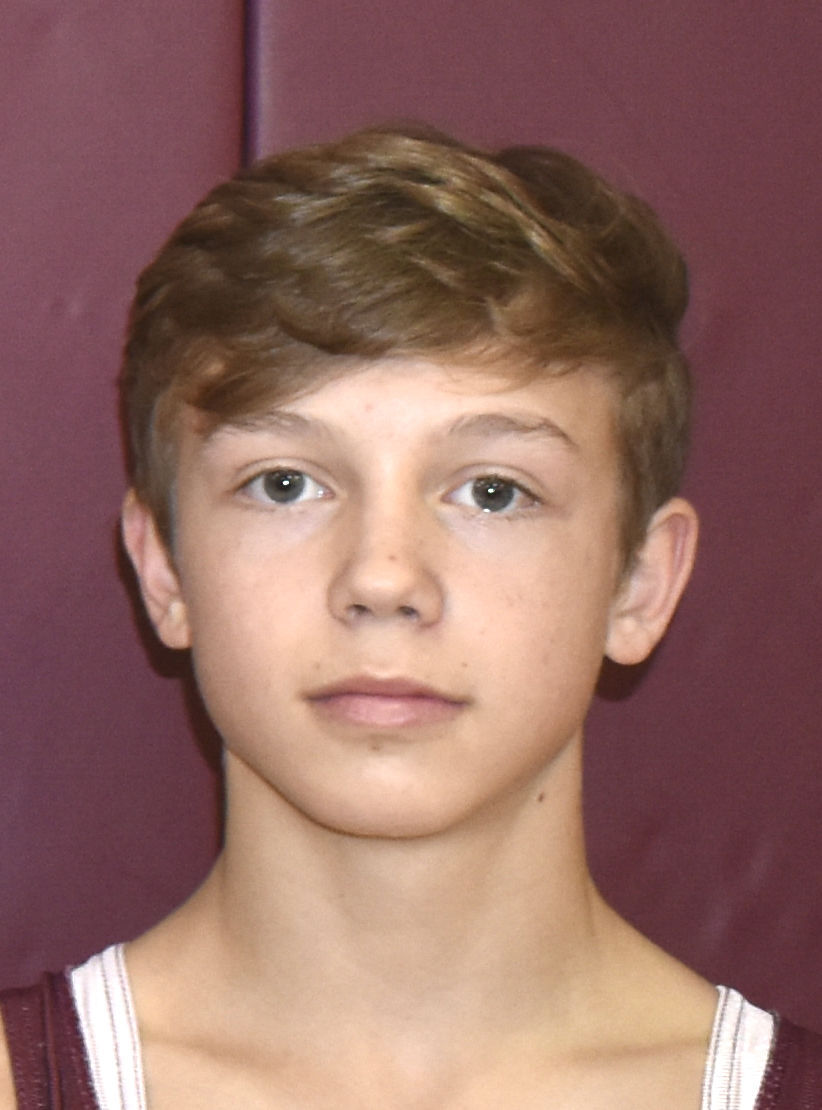 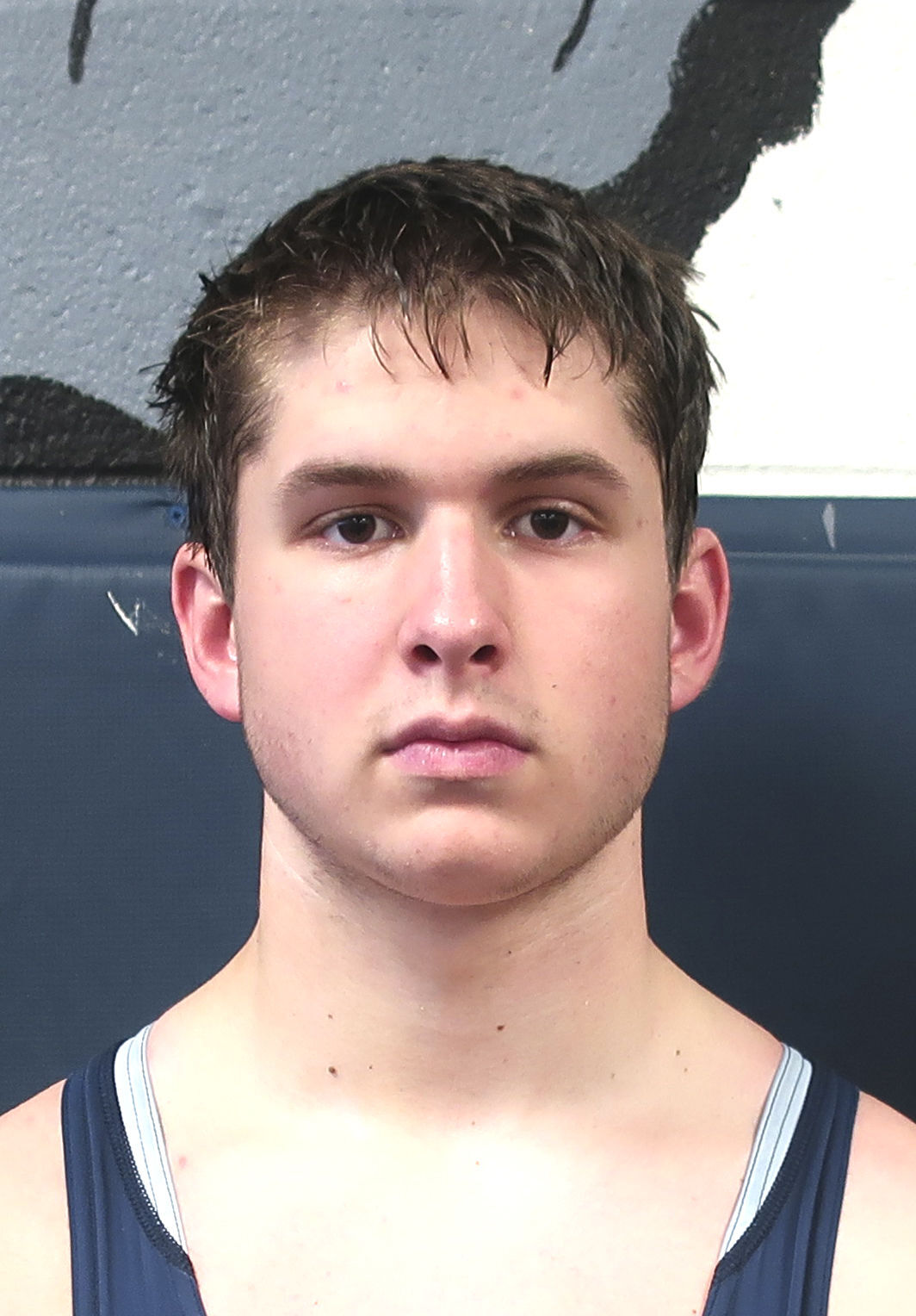 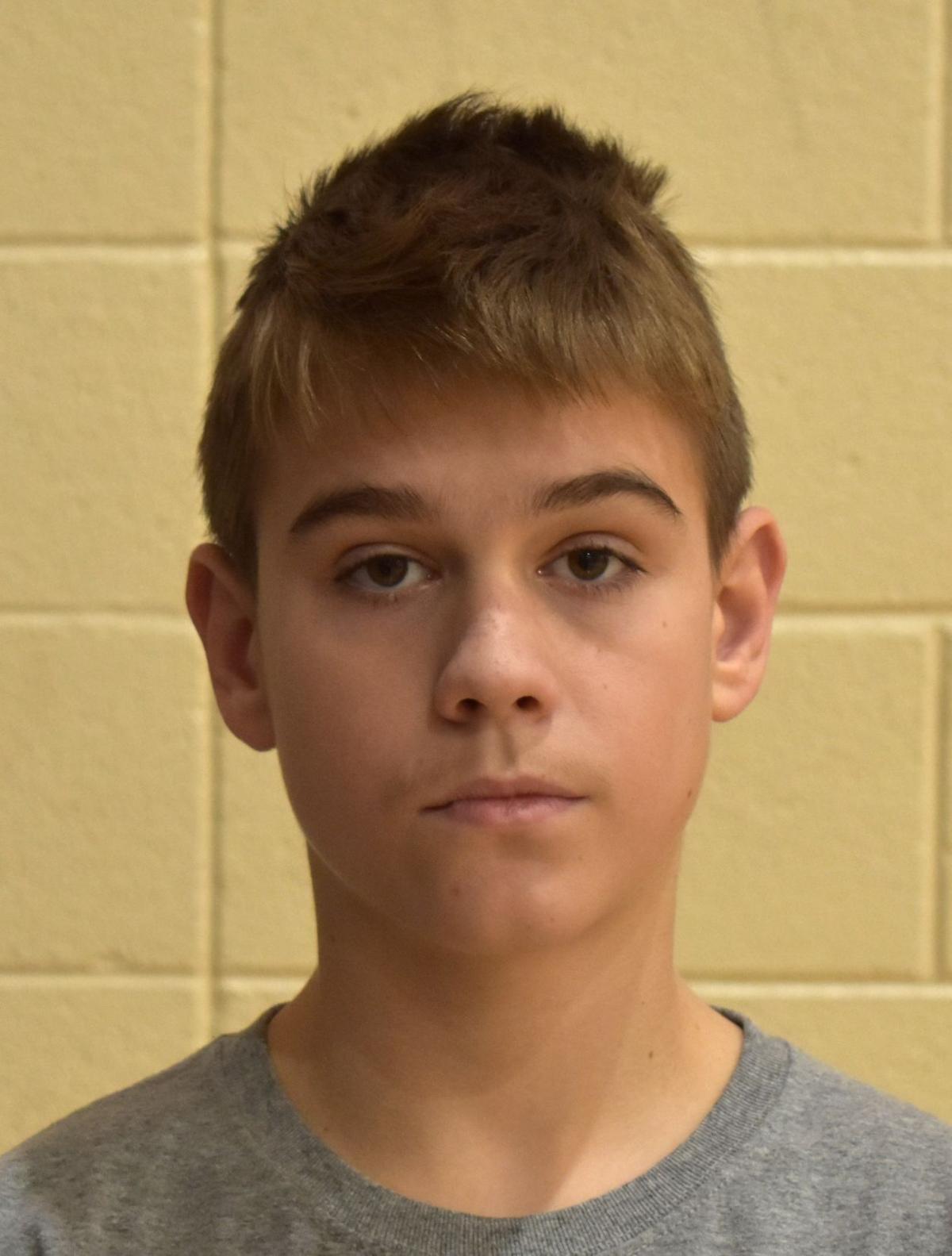 If there’s a wrestling season for area teams, the experience is going to be a lot different than normal.

As a result, coaches’ expectations for their wrestlers might be a little different than they would be in a typical year. While there are a fair number of wrestlers who have been able to get some match time with club teams, there are also wrestlers who will be lacking in training whenever the competition season begins. Offseason workouts have focused on strength, conditioning and individual exercises.

“What my guys need to do is drill, in my opinion,” Millbrook coach Jeff Holmes said. “We haven’t touched a mat since February. The social distancing and not being able to touch is probably the biggest obstacle. For me, it’s a safety thing. Following the VHSL guidelines, making sure that we’re doing everything to keep our athletes safe. It’s going to look different.

“This whole not being able to get on the mat, it hurts some of our younger guys, the guys that are trying to grow. There’s a lot of growth in some of that offseason training and the drilling, and the summer matches. It’s part of the process. Injuries can happen without having the proper conditioning and flexibility, so safety is going to be the No. 1 priority.”

With students only in school two days per week — attending either Monday/Thursday or Tuesday/Friday — Sherando coach Brian Kibler said developing a consistent routine has been a challenge.

“We’ve had guys who just strictly wrestle with club teams,” Kibler said. “We have guys who strictly do weight room. We have guys who do a little bit of both. A lot of times they’re not there altogether as a team.”

Another challenge has been keeping kids in good mental shape when they’re away from the athletic arena.

“[It’s] just keeping kids positive, every time there’s a meeting and things get delayed,” Handley coach Troy Mezzatesta said. “We just haven’t had anything that makes you say, ‘Oh my gosh, that’s good news.’ It’s, ‘No. you can’t do that. No, you can’t do that.’ Just trying to keep the wrestlers positive as we hopefully move toward being able to play [is a challenge]. I was just happy that we were able to hand out some T-shirts that we ordered the other day. We try to take little victories when we can.’”

“We were very successful I feel like, with the freshmen class, getting those kids out and around us, and communicating well with them,” Crenshaw said. “We didn’t have as much as a success rate with older kids, but with jobs and other work things going on, we understand.”

Clarke County coach Jon VanSice’s team was cleared to begin daily practice on Dec. 21, one week after VanSice presented his case to Clarke County’s school board to not cancel the wrestling season immediately.

He said last week things have been going well for his team in terms of wrestling, but the uncertainty of whether there will be a season is always in the back of the team members’ heads.

“Not knowing what the future holds for us, that’s the big challenge,” said VanSice, whose roster numbers 12 this year.

Mezzatesta hopes wrestlers get the chance to show what they can do.

While wrestling has been scrutinized because of the high contact nature of the sport, VanSice pointed out in Clarke County’s school board meeting that wrestlers have competitions that are much shorter in length (a five-minute maximum for each bout this year) and have significantly fewer people involved than other sports, given that only two people are on the mat at once.

Wrestlers will likely not be competing more than twice per day in the regular season, and there are opportunities to sanitize after every match and during every practice.

“We’re going to manage it,” Mezzatesta said. “Wrestling has always done a good job of taking care of their kids. We have a weight-loss plan in place so kids aren’t doing it irresponsibly and losing too much weight. Whenever there’s a skin thing going around, we don’t want that passed on [from wrestler to wrestler]. We clear it up, and make sure they have the proper paperwork so that the kid can return safely and not effect other people. Even before COVID, we didn’t let any kid into practice that has a fever or sick. We don’t want to lose mat time for the vast majority of a team. If you’re sick, go home and get better.

“At [competitions], you’ve got five minutes at most on the mat, then you go take a shower, and you put a mask on when you return to the bench. At practices, we can follow guidelines to limit exposure. I just hope people really think about how there really isn’t much exposure time, especially compared to other sports.”

As far as the actual wrestling, the Winchester-Frederick County schools will once again have to deal with some powerful opponents.

The Class 4 Northwestern District features Fauquier, which had four underclassmen who qualified for the state tournament on last year’s Class 4 state championship team. Mezzatesta believes one of his five state qualifiers from last year, sophomore Kingsley Menifee (39-6 at 182 pounds) is now wrestling for the Falcons. Liberty had three underclassmen state qualifiers on last year’s team that placed third at the state tournament.

Sherando was the top local team last year, placing third at both the Class 4 Northwestern District and Region 4C tournaments. The Warriors have nine people back who started at last year’s district tournament, and three people who qualified for the state tournament.

Handley will return at least four wrestlers from last year’s district tournament. The Judges’ roster includes state qualifiers Cam Gordon (46-9, third at 106, 113 or 120 this year), a junior; and sophomore Rodd’ney Davenport (25-12 at 220), who has bumped up to 286 pounds in weight and will compete as a heavyweight.

Millbrook returns seven wrestlers from last year’s district tournament and one 2020 state qualifier in junior Matthew Topham (28-18), who is moving up from 113 to 126. The Pioneers also feature senior Jack Winans (22-7 at 182, 195 this year), whose season ended early due to injury in 2019-20 following his state-qualifying season as a sophomore.

The Eagles will have contend with Strasburg in the Bull Run District. The Rams return five state qualifiers from last year’s Class 2 state runner-up.

The qualifying procedures for regional tournaments have not been made official yet, but only two wrestlers from each region instead of four will advance to the state tournament this year due to COVID-19 reductions.

Kibler’s outlook: “We have a lot of experience back. We won’t be as deep as we’ve been in the past. For the most part, I think we should be able to fill all the weight classes. There’s been a lot of guys who have found their way into wrestling rooms. Some of the clubs were closed down for a while, but the independent leagues have really kind of picked up. Tyler Koerner, Keagan, Brogan and Brandon are some of the guys who have found their way into rooms and improved. Saxton has probably had a better preseason than he’s ever had, just coming to club wrestling and being around the mat. He’s gotten more wrestling in the fall than what he had in previous years because of no football.”

Crenshaw’s outlook: “The seniors this year that should be starting for us all know what is expected and needs to be done, and our hope is that they can push the younger ones along with them and challenge each other. This is going to be a growing year for us. There are a lot of new faces that are going to be thrown right into the lineup. We’re going to struggle a little bit in the lower and upper weight classes, just because we lost a lot of seniors in those spots. If we’re able to have a season, hopefully, the younger guys can learn a lot and be better prepared for next year.

“But our key guys have all been to states and know it’s going to be a challenge to get there this year. Chris Nuss, he’s been doing real good in the offseason. The success he had last year at the state tournament, making the semifinals, was huge for him, and we’re hoping we’ll be able to get back there this year. Joey had a little disappointed last year at regionals, but he was in a tough weight class. We feel like Aidan should have been in the semifinals at states, and he’s got a fire in him.”

Mezzatesta’s outlook: “Cam’s putting in some strength training and went to some camps around the Pennsylvania area when they were open. Simon’s gotten a lot stronger and has been working hard. I feel we should have a pretty competitive team. We’re hoping for some of the freshmen to step in and make an impact, because we do have quite a few in the 120/126/132 range. They can come in and get some quality time and score some points for us.”

Holmes’ outlook: “Jack’s been a varsity guy the last three years, so with him healthy, I expect good things, and he’s got a good shot of being a state place winner. Matthew works hard, and he’s got a tank. He comes to all the offseason stuff, and I know he’s got big goals. That’s what’s going to drive him, for sure. In some regards, we’ll be able to wrestle without some of that pressure, because I don’t have a very experienced team.”

VanSice’s outlook: “I only have one senior. We have a lot of experience, but there’s still a lot of youth. I’m not sure how qualifying is going to go for regionals, but I think we can qualify six or seven people for the state tournament if we can stay healthy. Titus Hensler, Trace Mansfield and Michael Perozich were all hurt last year. They’re very physical and hard-working kids, and I like what I’m seeing out of them.”