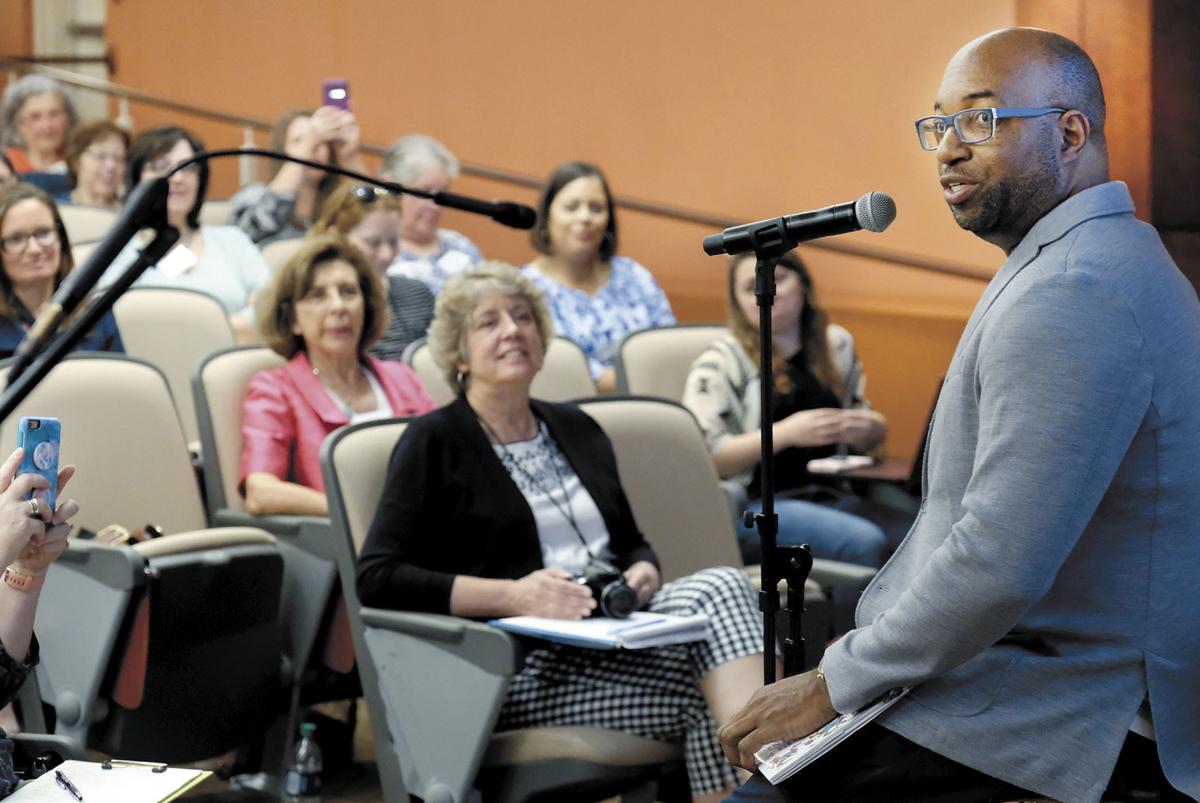 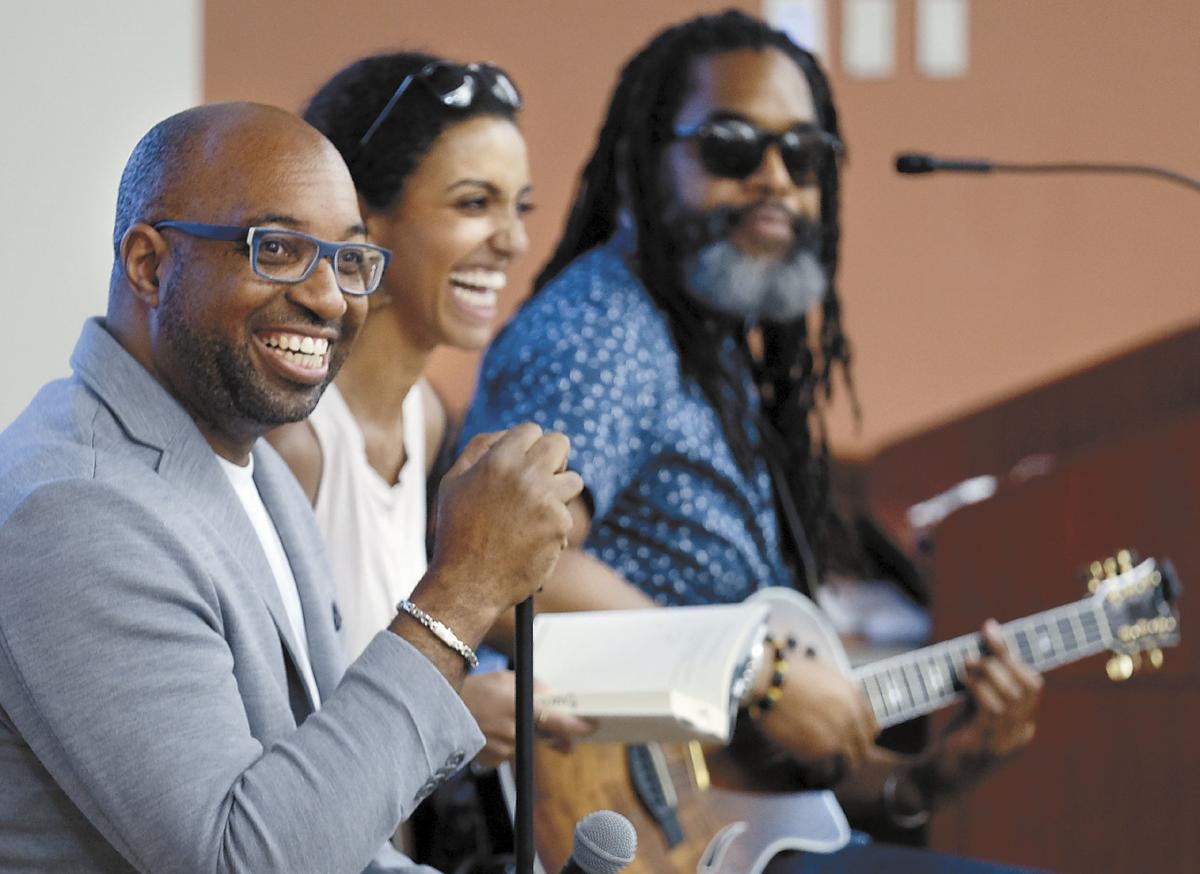 Kwame Alexander (from left) shares a laugh with schoolteacher Hannah Djalleta and singer Randy Preston on Monday. Alexander selected Djalleta from the audience to rap to some of his poetry. 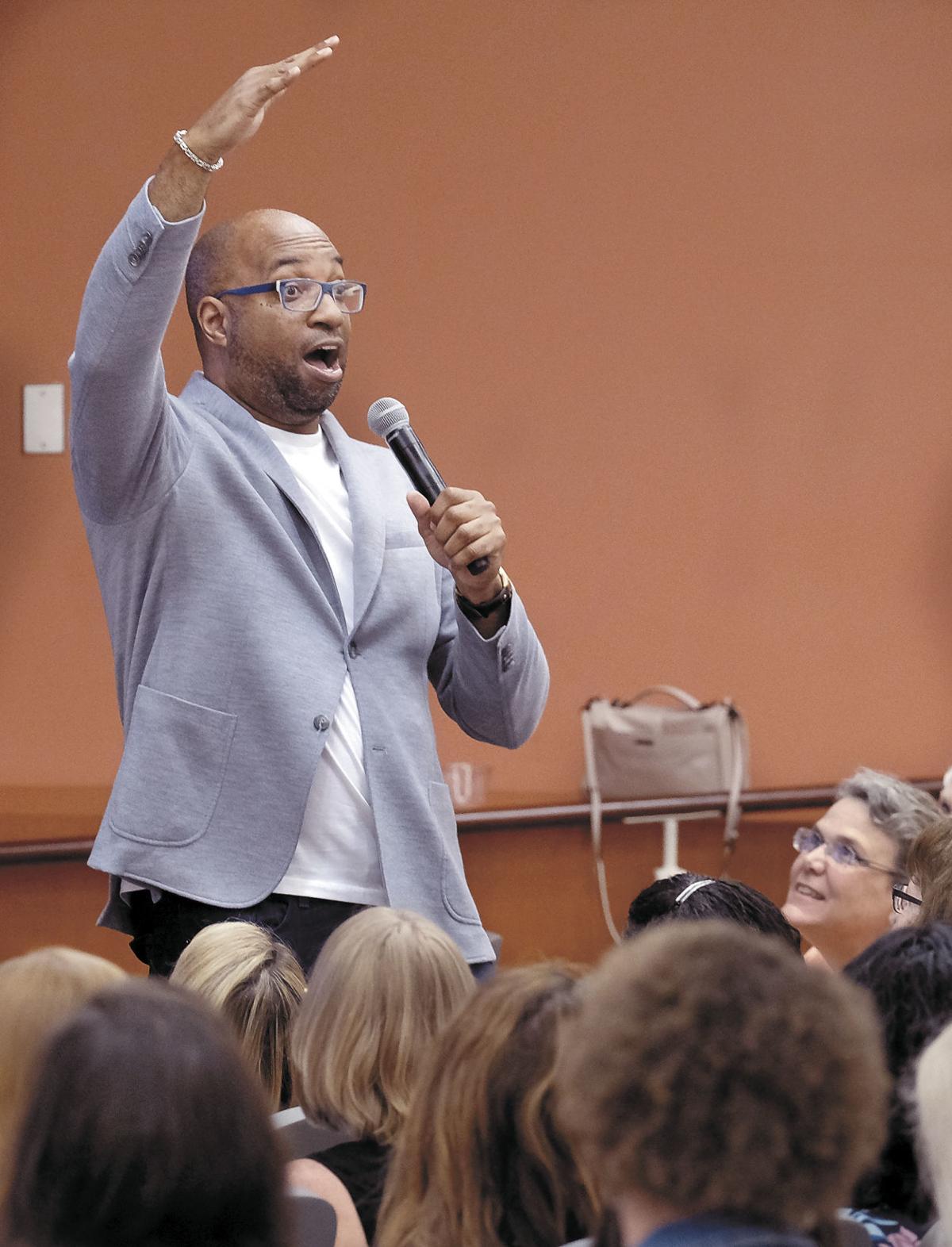 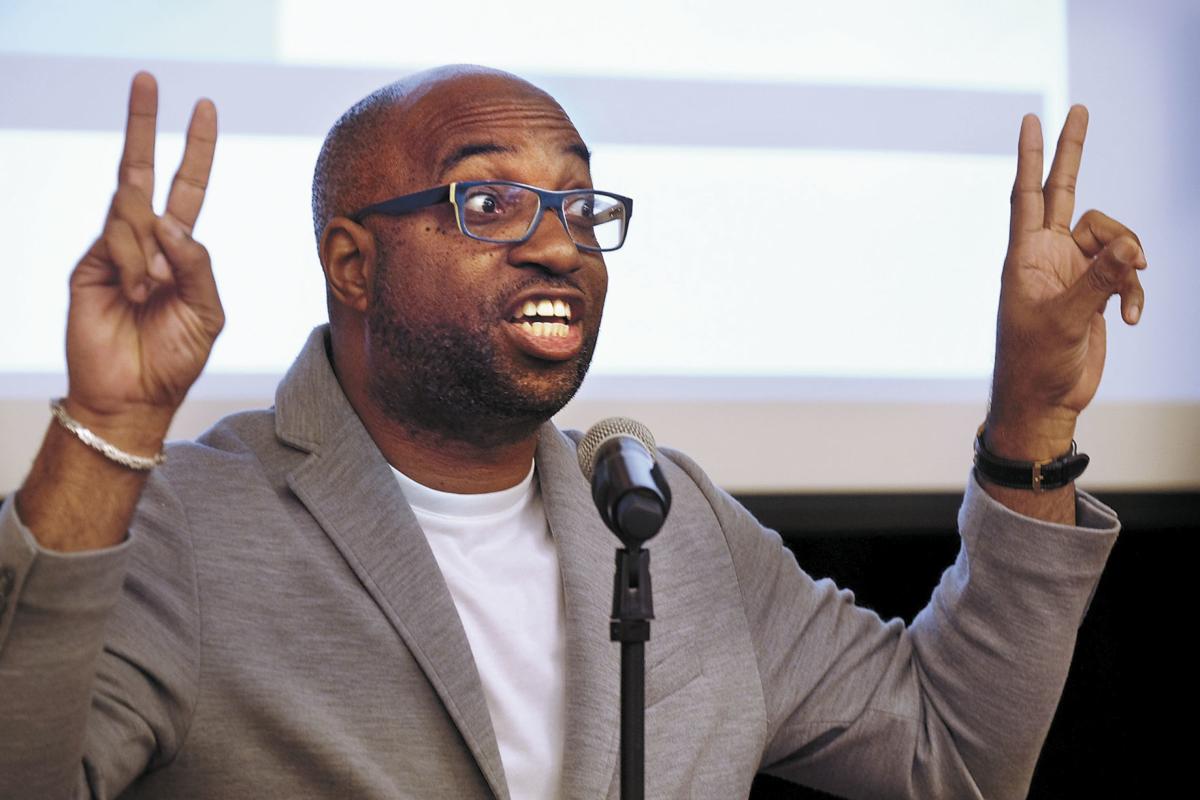 Kwame Alexander (from left) shares a laugh with schoolteacher Hannah Djalleta and singer Randy Preston on Monday. Alexander selected Djalleta from the audience to rap to some of his poetry.

WINCHESTER — Since his last visit to Shenandoah University four years ago, children’s author, poet and educator Kwame Alexander has rediscovered his passion for speaking through music.

He made this realization when he did a reading from his book “Booked” at a Washington, D.C., bookstore accompanied by his friend Randy Preston on guitar.

“Booked” is about a boy who loves soccer but hates reading because of his dad, said Alexander, who brought his passion for speaking and storytelling to SU on Monday for the first day of the five-day Children’s Literature Conference, now in its 34th year.

“The kids were loving it,” Alexander told an audience of conference-goers in Halpin-Harrison Hall, many of whom were K-12 teachers. “For the next hour, Randy and I did this set of music and poetry and literature, and here’s the thing y’all, I rediscovered my passion.”

Alexander, 50, of New York, is a New York Times bestselling author who has written 32 books, including the verse novel “The Crossover” that won the 2015 Newbery Medal for “most distinguished contribution to American literature for children.” He is a graduate of Virginia Tech.

He estimates that he and Preston have visited about 700 schools over the past 3½ years.

“Our goal has been to get kids to want to read,” Alexander said.

Throughout his keynote talk and “literary concert,” audience members were encouraged to share what they learned and what they might bring to their classrooms. Inspired by Alexander, one teacher said she’d like to incorporate reading and music in her English class, with one student reading from a book while another student plays music.

Alexander said he grew up in a family immersed in books. By the age 3, his favorite books were those written by Lucille Clifton, Nikki Giovanni and Langston Hughes.

When he spoke at a high school in California, he was told by the principal the students don’t like poetry.

But Alexander decided he’d share a story and poem about his daughter, who was 15 at the time and told him she wanted to go on a date. In response, he wrote a poem called “10 Reasons Why Fathers Cry at Night.”

“1. Because teenagers don’t like park swings or long walks anymore unless you’re in the mall/2. Because holding her hand is forbidden and kisses are lethal/3. Because school was fine, her day was fine, and yes, she’s fine (so why is she weeping?)/4. Because you want to help, but you can’t read minds,” Alexander recited as Preston slowly and softly strummed the guitar. “5. Because she’s in love and that’s cute, until you find his note asking her to prove it/6. Because she didn’t prove it/7. Because next week she’s in love, and this time it’s real, she says her heart is “heavy”/8. Because she yearns to take long walks in the park with him/9. Because you remember the myriad woes and wonders of spring desire/10. Because with trepidation and thrill, you watch your daughter who suddenly wants to swing all by herself.”

After reading the poem to the students, Alexander said he watched some girls cry as the boys put their arms around them to comfort them. Soon enough, the boys were buying copies of the book with the poem in it.

An effective way to get middle and high school students interested in poetry, Alexander said, is through list poems. A list poem can be a list of people, places, ideas,  or things you do, according to online information. It can rhyme, but it doesn’t have to. Repetition is often used in a list poem. List poems are thought out and cohesive, not random.

During one school visit, a student named Kevin asked Alexander why he speaks at schools. Alexander told him he believes words can “transform lives.” Alexander said he got an “F” from his AP English teacher on a 30-page paper he wrote on “Things Fall Apart” by Chinua Achebe because it was so good she didn’t believe he wrote it. His parents challenged the decision, and his grade was changed to an “A.”

Other authors and illustrators attending this week's conference include Kevin Henkes, who received the Caldecott Medal for "Kitten’s First Full Moon" in 2005, and Bob Shea, who penned "Unicorn Thinks He's Pretty Great." A Rockin' the Library celebration in honor of the conference was held Monday night at Handley Library for children and their families.